Pilots flying less pure breeds may also compete at the discretion of Concours d'Pigbucket HeadQuarters (CDPBHQ) and on a potentially inclined playing field!
The goal of the competition is to encourage pilots who choose to fly PigBuckets to get out there over the fence as much as possible.

In either case we aim to have some friendly competition where beginners or occasional pilots have a reasonable chance of winning.

To be eligible for scoring all flights must be submitted to WeGlide (weglide.org)

Piglet Class is open to any BSS pilot who has not yet gone cross-country or who has only limited cross-country experience. Like every other rule, interpretation of this will be subject to the discretion of the CDPB committee.

1 piglet point shall be earned for every turn point reached around the Clayton's triangle task.

Start at Beverley BUT you can only complete the task in a CLOCKWISE direction.

Task and Waypoint details are below.

Coaching or mutual flights in any 2-seater are allowed, but will be discounted in the following manner:

Entry to Bacon Class is open to any BSS pilot flying the mighty Grob Astir CS (or allowable substitute**) cross-country and uploading the flight to Weglide.

·        2 bonus points for anyone flying a personal best distance

·        2 bonus points for anyone flying a personal best average speed

For all classes the pilot with the most points at the end of the season (30/4/2022) wins a) glory, b) a trophy.
As is the tradition, the rules are subject to interpretation by CDPBHQ and no further correspondence will be entertained into once a decision is made.

A reminder that during the course of last season TPTB (The Porkers That Be) ruled that a competitor may compete simultaneously in 2 classes, however the flight can only be scored in one class.

President Geoff has confirmed that there will also continue to be a monthly prize of a $50 credit to your flying account for the "most meritorious" flight of the previous month - in any class, but with a bias towards the Piglets.

Start at BEVAIR by crossing the Start Line from SE to NW Then pass through TP1 Rocky Farm, Turn East toward TP2 Corner Farm and then SW toward TP3 Big Forest. Cross the Finish Line to complete the task at BEVAIR 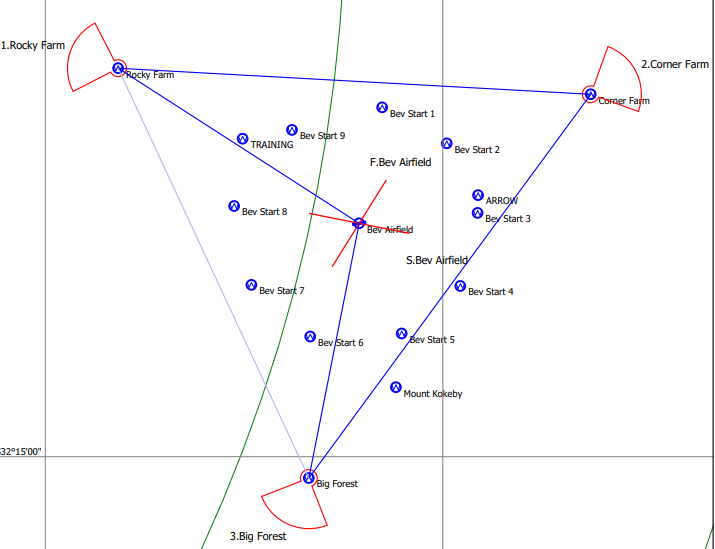